On Saturday, I made the long 3.5 mile commute to the Irvine Spectrum to meet up with local (and a few long distance) search marketers in wishing Danny Sullivan a happy 40th birthday. Danny had been vacationing in Southern California with his family and had also been kind enough to join the moderating staff present at the Search Engine Watch LIVE event held at The Disneyland Hotel two days prior. Danny's wife Lorna was nice enough to arrange a shindig for Danny at Dave and Busters where we could celebrate in style amidst gaming, drinking and eating. 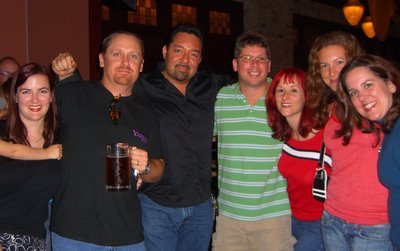 A lot of Danny's non-search friends were also in attendance from his days as a newspaper journalist with the Orange County Register and LA Times and even from high school. It was nice to see everybody in such a casual setting and playing video games with each other. One really disconcerting image I have though is tough-guy Web Guerrilla Greg Boser with a pink gun: 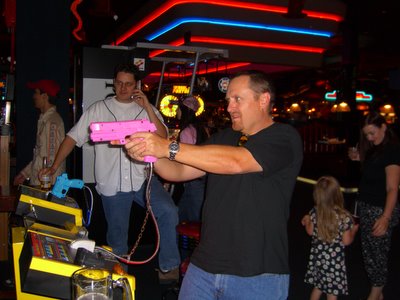 Tim Mayer (Yahoo) and his family stopped by while they were spending time in Southern California also: 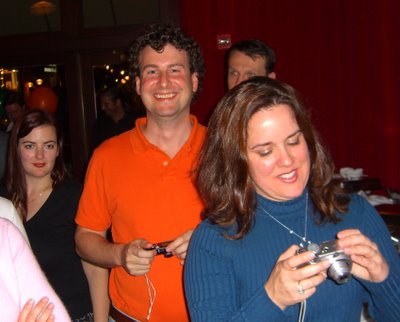 Also in attendance were search marketers Alex Bennert and Todd (Oilman) Freisen. Danny did manage to blow out all 40 candles proving that he is full of hot air ;)
Thanks for making Orange County your place for celebrating your 40th Danny!
Ramblings by Joseph Morin at 12:58 PM No comments:

Last Thursday, Search Engine Strategies brought it's new shorter half day format to The Disneyland Hotel for its second LIVE conference which in a nutshell is kind of a cross between SES and speed dating. Instead of several sessions with multiple panelists all talking about a particular topic, here you have several topics being discussed at once by several panelists - all of whom have a broad range of experience levels across the search marketing and advertising spectrum. The panelists included Danny Sullivan, our own esteemed Editor of Search Engine Watch, and fellow Forum Moderators Elisabeth Osmeloski, Editor of Search Engine Watch Forums, Nacho Hernandez from iHispanic Marketing Group, Jennifer Slegg of JenSense fame, Alex Bennert from Beyond Ink, David Wallace of SearchRank and of course Yours Truly.

We attempted to keep to the forum format by trying to engage the audience as much as possible and keep an informal but lively discussion of particular search topics of interest. We asked a lot of questions of the audience and we pretty much nailed the demographic of the participants by type of SEM/SEO practiced, what language set sites were optimized for, size of sites, types of revenue models and what role our attendees played within their organizations and what type of organization they represented. What surprised me was the number of attendees representing agencies (about 15 - 20%) and how many in-house search marketers were in attendance (about 40% of the room). Pure affiliate marketers (25% or so) was a much lower percentage that I anticipated.

Once we had our demographics, I noticed the panelists attempt to focus as much toward the majority of their particular area of expertise as possible. Nacho Hernandez focused on multi-cultural online marketing as is his specialty, I carried over my presentation from Stockholm - "Site ECG, Does Your Site Have a Healthy Heartbeat" which although I didn't speak on this topic, I understand was a popular presentation from the last San Jose SES. I focused more on my area of expertise - big brands, and enterprise level sites and I tried to use examples from large sites that I have worked on with millions of pages and millions of pageviews to get my point across. Jennifer Slegg spoke on Contextual Advertising and did a good talk on Yahoo's new Publisher's Network. Yahoo YPN was also in attendance and sponsored the cocktail mixer right after the show. Alex Bennert focused on the conversion and usability of a website and went into deeper detail than I did on specific topics such as site search engine analysis and using information on hand to drive more sales. David Wallace and Danny Sullivan didn't have formal presentations but were both on hand to answer Q & A topics which they did.

It was a real treat having Danny on our panel and it was kind of a fluke that he was even there at all. Fortunately, he was vacationing in Orange County (where he is from originally) with his family and actually came straight to the event from Disneyland that morning. Danny spoke on a variety of things such as Google's recent stock price surge after earnings (340 that day, now 383 as I write this) and could the market sustain such a large market cap for Google and could there still be room for growth. Danny gave an example of a stock analyst quizzing him recently who had done incredible research into Google's company performance and had charts and spreadsheets mapping out hopeful targets to track where Google's stock price could go, but as Danny mentioned, he couldn't account for Google changing its revenue model or adding new products or services and therefore was entirely unpredictable. We live in a fast changing industry and nothing quite frankly surprises me anymore.

The Q & A sessions went surprisingly well and I thought that the wide diversity of experience on the panel led us all to be able to almost know who was going to answer the next question based on what topic it was on. Danny jumped in and gave a lot of credibility to a lot of what was asked and answered by expanding on certain topics and Elizabeth really did a fine job of moderating the event by asking a lot of thought provoking questions that certainly engaged the audience - to the point in fact of almost tears by one audience member who had experienced a high percentgage of click fraud.

The cocktail mixer went well and I would guess that a good percentage of the audience stuck around to ask questions, I did notice that the panelists werent hanging around each other as everyone had a crowd around them - especially Danny ;) it's rare to have that kind of access to Danny at an event and even rarer at a SES show where several thousand people are milling about and Danny is literally running between sessions and obviously sidetracked by everything going on. By his being on vacation, his relaxed mood continued into the pace of his discussion and aterwards participation.

After the show, the panalists reqrouped (we really are all good friends outside of the panel) and went up to the Jazz Kitchen in Downtown Disney and a few of the audience members joined us for really great New Orleans style food. I got home maybe around midnight from a great day of conferencing and networking and eating. Cant wait for the next one, I've heard a few rumours about where the next one will be but nothing has been confirmed yet. I did run across a couple of write ups from audience members - Michael Nguyen covered the event in his blog Social Patterns and Mike Banks from Web Pro News wrote how we engaged the audience forum style during the event. I will post pictures from the event as soon as I get them.
Ramblings by Joseph Morin at 6:45 AM No comments: